All Fired Up: How Fire Performance Has Blazed a Trail for Eric Wideman as a Software Engineer 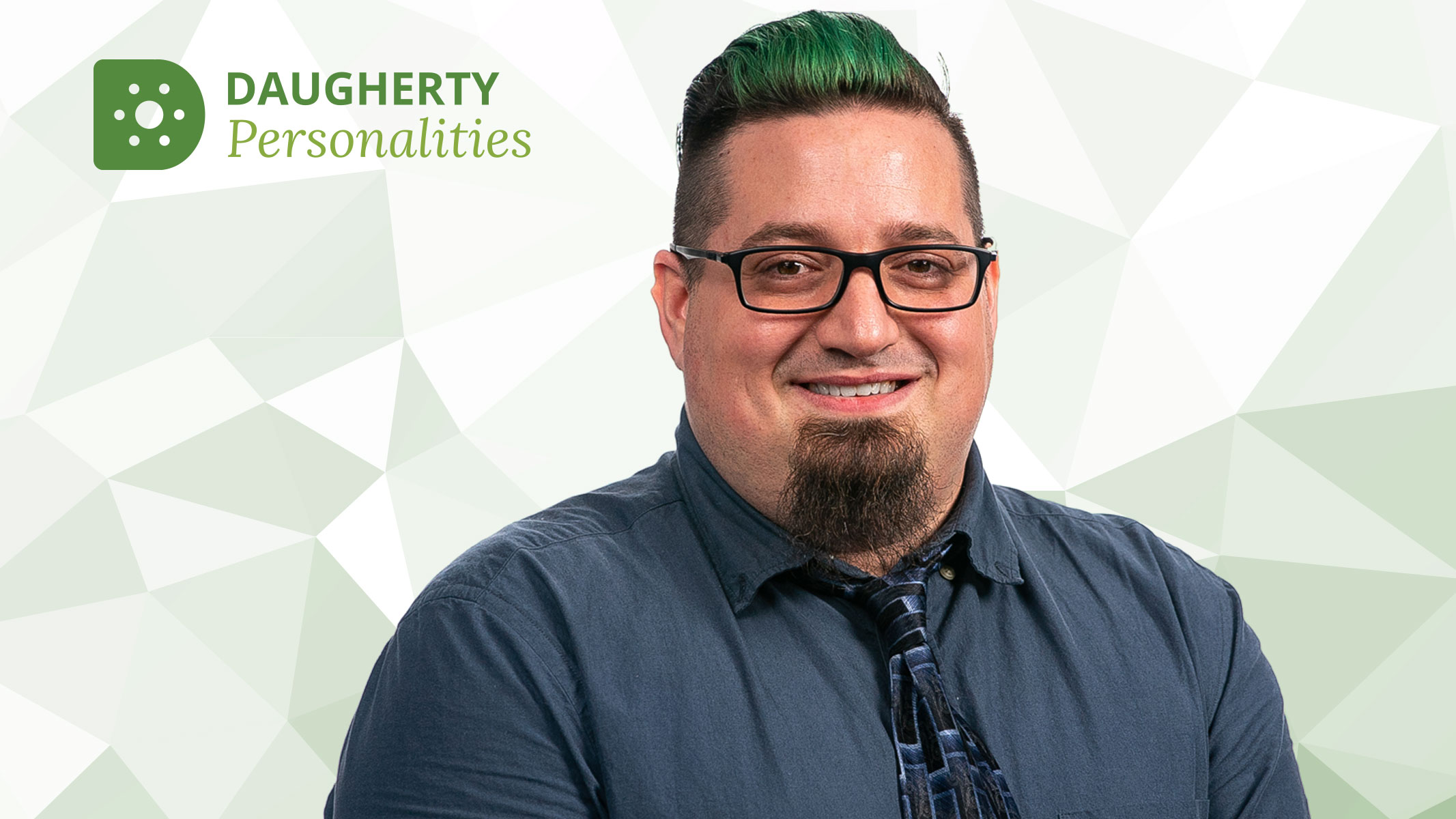 Everyone has a primal fear of fire. It’s hot, and you don’t want it to hit you.

Yet Daugherty Software Engineer Eric Wideman likes to play with it.

Eric is a fire performer. He is skilled in multi-prop, a concept similar to full-stack. Multi-prop means he can use a dragon staff, do fire juggling, use a fire whip, do fire poi (Pacific Island fire rituals, balls with strings on fire) and use other props. And as a full-stack developer, he can leverage multiple tools to build applications — from programming languages to frameworks to databases.

Eric got started in fire performance at 15 when he joined the St. Louis Renaissance Festival, and started learning fire juggling (one of the more difficult props). As a teenager, playing with fire looked like fun, and he loved the rush and release that came from doing it.

Today, performances consist of Eric and his wife, and four or five other people. They alternate, performing in duets, with two people on stage either using different props and contrasting one another, or using the same props and mirroring one another. Making sure the routine is visually dynamic is important.

And working as a team is vital to their success.

For one, Eric has a safety crew standing off-stage with fire blankets in case something goes wrong. Plus, the performers alternate, to ensure someone doesn’t have to use two high-intensity props back-to-back, which would wear them out.

Similarly, as a software engineer, Eric relies on a team. This is baked into Daugherty’s culture. Even when a consultant is at a client site, they still have Daugherty’s collective knowledge backing them.

Knowing he has a team behind him, Eric gets a boost of confidence. A large body of research supports that safety is a key performance indicator, especially in the Agile community, with a concept called the edge of chaos. The edge of chaos is where the most productivity and innovation take place. Chaos itself puts somebody in survival mode, but too much stability makes somebody overly comfortable, unwilling to take risks. It’s that balance of stability and chaos that draws out innovation.

“When you get in a panicked state, you stop thinking clearly,” Eric said. “That’s when fire can become dangerous — not just for you but for the people trying to help you.”

To get in front of this, Eric has followed a similar progression with each new prop. First, he uses a day prop (a non-fire version), and practices until he gets good enough that he isn’t dropping it all the time.

Then he lights the prop, and just holds it, getting used to the fire being close. Fire adds a lot of weight — it’s got a wick that absorbs fuel, and the fire itself has drag and resistance — so this changes how the prop feels.

Only when he’s good with the day prop, and used to holding it when it’s on fire, does he practice tricks.

Some props are still terrifying to Eric — the fire whip, for example. One wrong move, and it can wrap around you. And because it’s so fast-moving, it’s hard to dodge. And if it does wrap around you, it wraps around multiple times.

The process then, for Eric, is just as much about bravery as it is proficiency. The longer Eric works with fire, the easier it is for him to regulate his fear. If the fire hits him, he knows he won’t burst into flames. Or if fuel from a wick hits his clothes, he knows the fire will probably just burn off the fuel and go away.

In the same manner, the longer he works as a full-stack developer, the easier it is for him to manage his stress levels, especially when he comes up against a problem he doesn’t know how to solve.

Perhaps the greatest overlap between fire performance and software engineering is the mindset.

“Performing with fire takes all your attention,” he said. “You enter into a kind of trance state. Afterward, once you’ve performed, you get a huge rush.”

Software engineering requires a similar focus — Eric has to decompose large projects into bite-sized chunks, tackling each piece one task at a time and shutting everything else out.

With this mindset, he’s created some of the…wait for it…hottest applications.

To see him perform with his wife and partner, go here!